Dianne and I recently took a month-long trip to see the Albuquerque, New Mexico Balloon Fiesta.  Additionally, we included visits to my older and younger brothers in Portland, Oregon and Phoenix, Arizona and other dear friends along the way.

As we approached the end of our trip, having put over 5,000 miles on the car over the previous 3 weeks, we experienced and event that surprised and dismayed us.  But, I'm getting ahead of myself.  I'll tell that story in a later, post.

We had previously rented a four bedroom, 2 bath BnB house in NE Albuquerque where our three couples stayed together.   Dianne and I arrived at the house and then went to pick up Dave and his wife Donna at the airport. Clancy and Connie arrived a bit later that evening, ending their driving trip from Phoenix.

The temperature at the fiesta was comfortable -- in the mid 70s.  Many people were carrying their coats or sweaters instead of wearing them.  I imagine the clouds kept many people away because the traffic to and from the Fiesta was much lighter than Dianne said it had been in earlier years.  We were grateful for that.

The picture below is intended to give an overview of the Fiesta.  I understand that on most occasions the sky is clear and bright, like this picture. The Fiesta we attended was not like that.  We experienced an abundance of clouds and rain.  The weather was also much warmer.  When Dianne had visited in earlier years, the skies were clear, but the temperature was much colder. 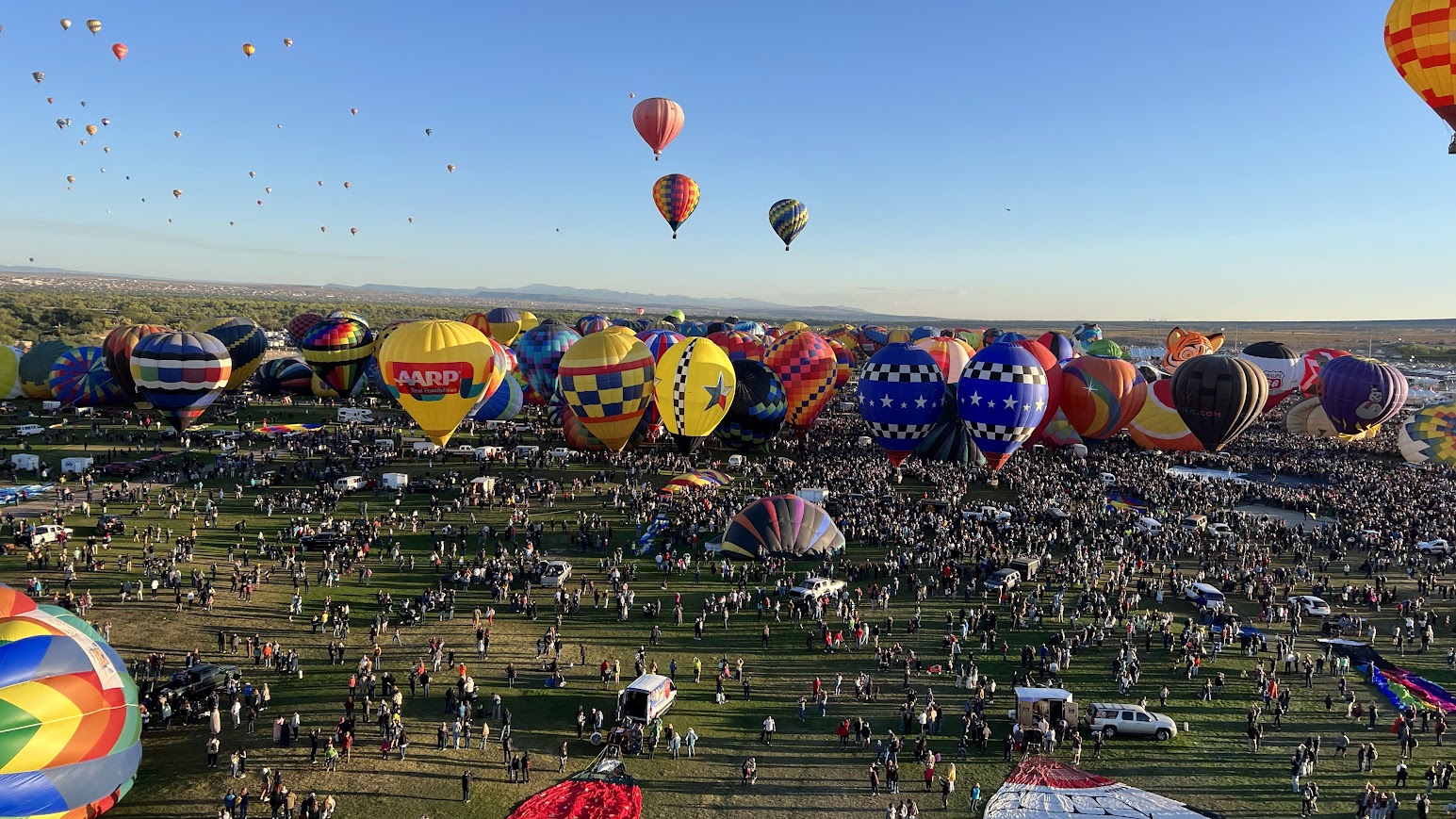 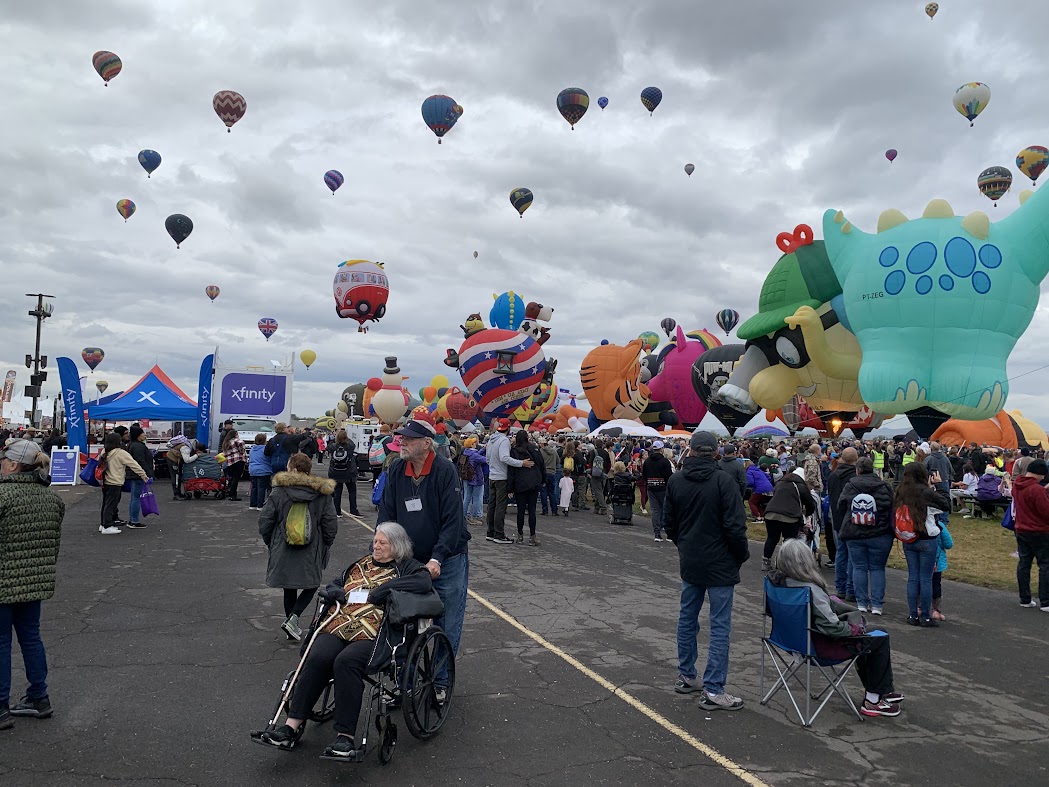 These were the skies we experienced.

We were told you could probably find a simple, unmodified balloon for maybe $15k to $20k, including the basket attached below the balloon.  New ones are, of course, more expensive.  Oh, and don't forget the need for an adequate vehicle to transport the balloon and basket.  It seems it would not be very difficult to exceed a $100k to take up this hobby.  I believe they accept checks!  While that can be a good thing, the problem for me is I doubt they would agree to hold the checks long enough! 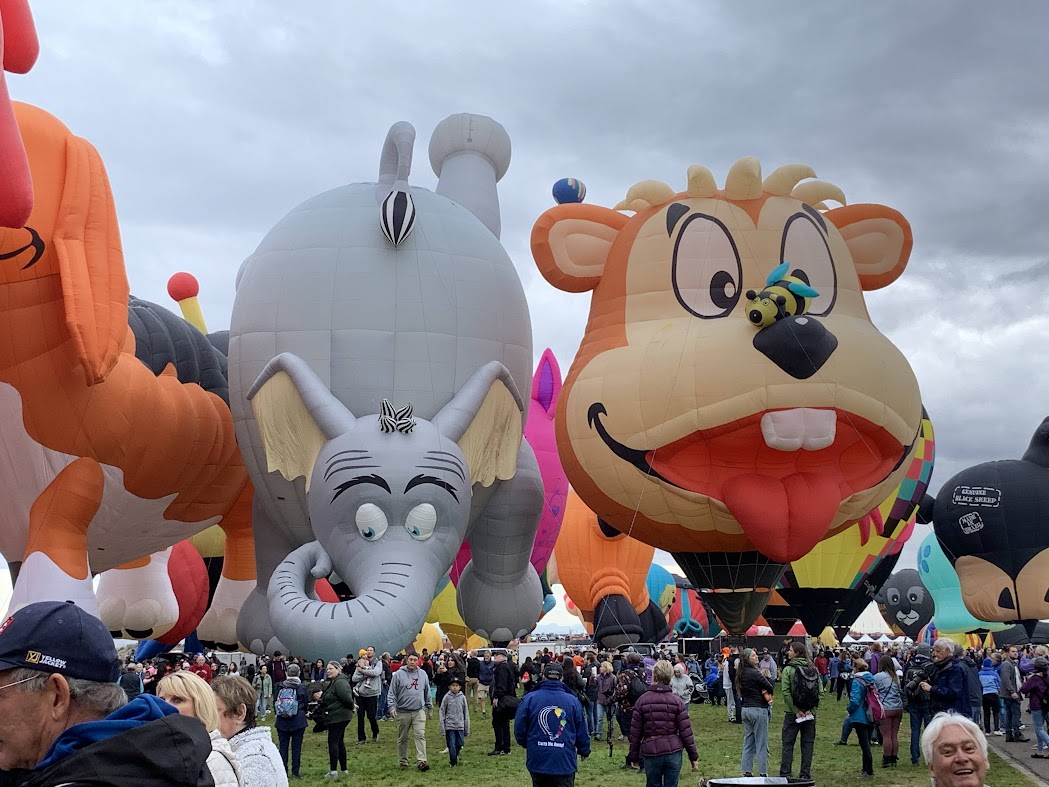 The balloons appeared in many different styles and shapes.

So, if you find yourself carrying the burden of excess cash in you bank account, this information may be very helpful in solving that dilemma.  No problem.  You can thank me later.  My hobbies seem to be a bit more limiting, such as collecting stamps, or bottles and cans.  That kind of thing.

What make a hot air balloon hot?  Hot air!  The picture below shows the air inside the balloon being heated by a hot flame in the balloon.  Standing near the flame is like standing near a warm fireplace.  The flame produces a lot of heat. 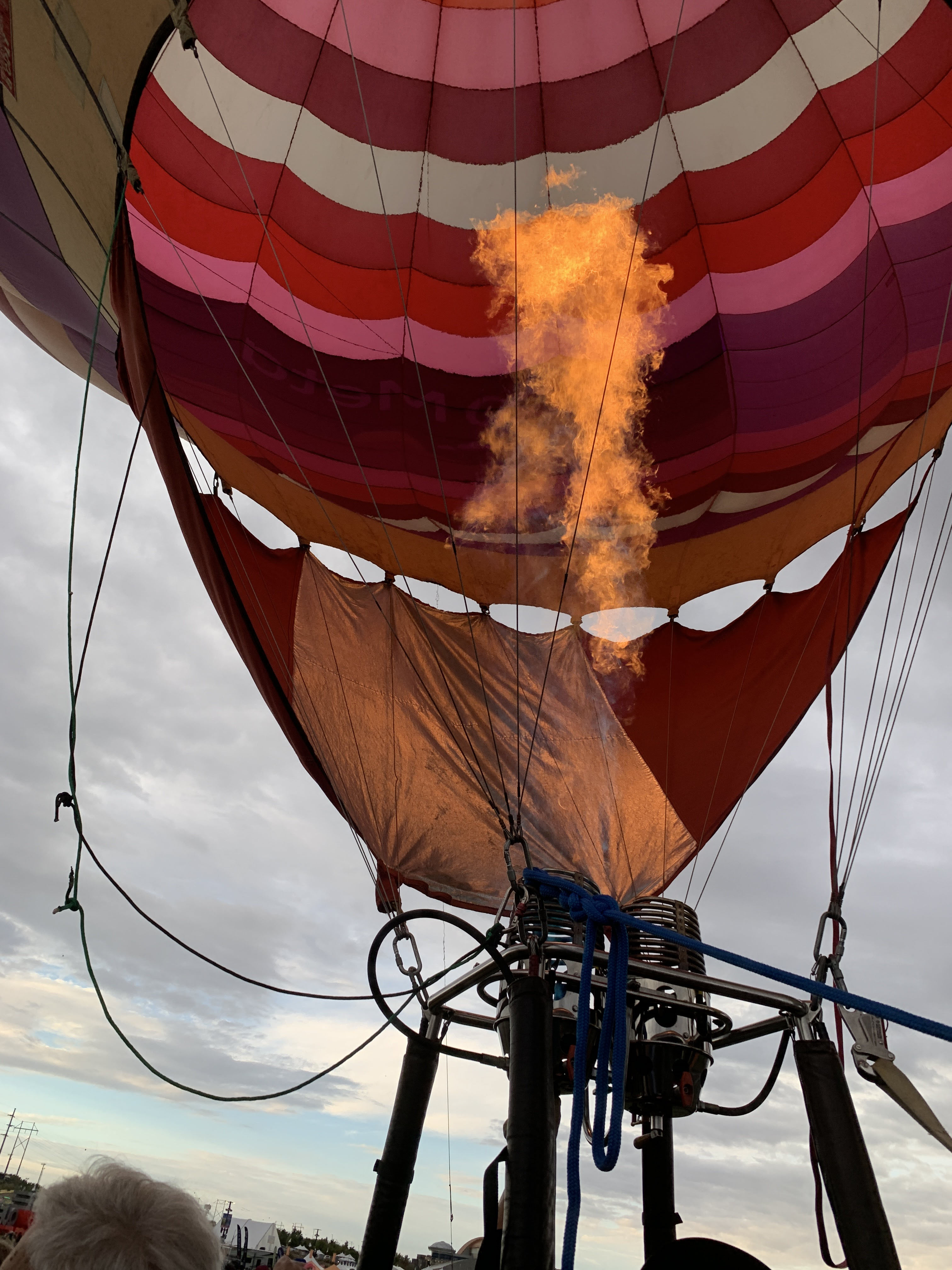 Air is heated by flame produced by propane gas.

Another fun event is when the balloons fly in the evening, as shown below.  Again, we were unable to see these balloons ourselves because many of the evening events were cancelled because of rain. 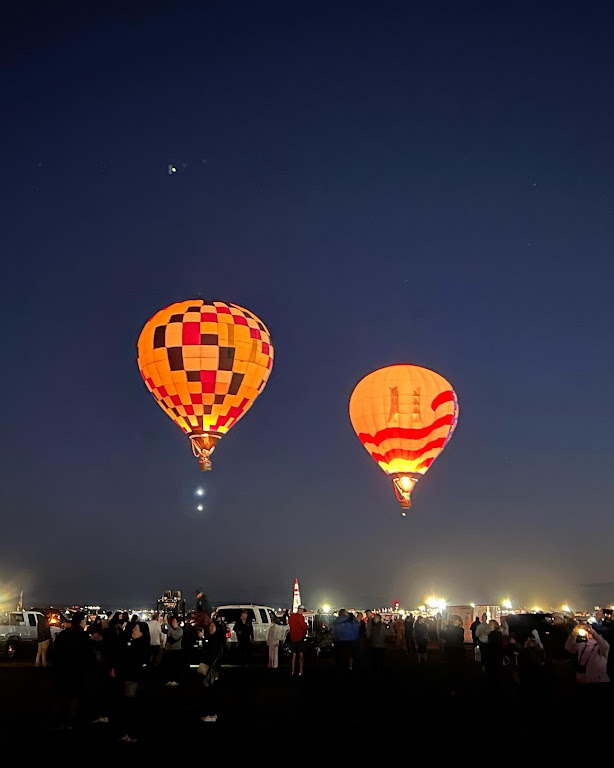 The annual Albuquerque Balloon Fiesta arrives in the first full week of October.  Even though the weather was not always fully compliant, we felt the experience was well worth experiencing.

One afternoon we decided to take the tram to the top of Sandia Peak.  The elevation at the top was just over 10,300 feet.  Each gondola would hold about 30 people. 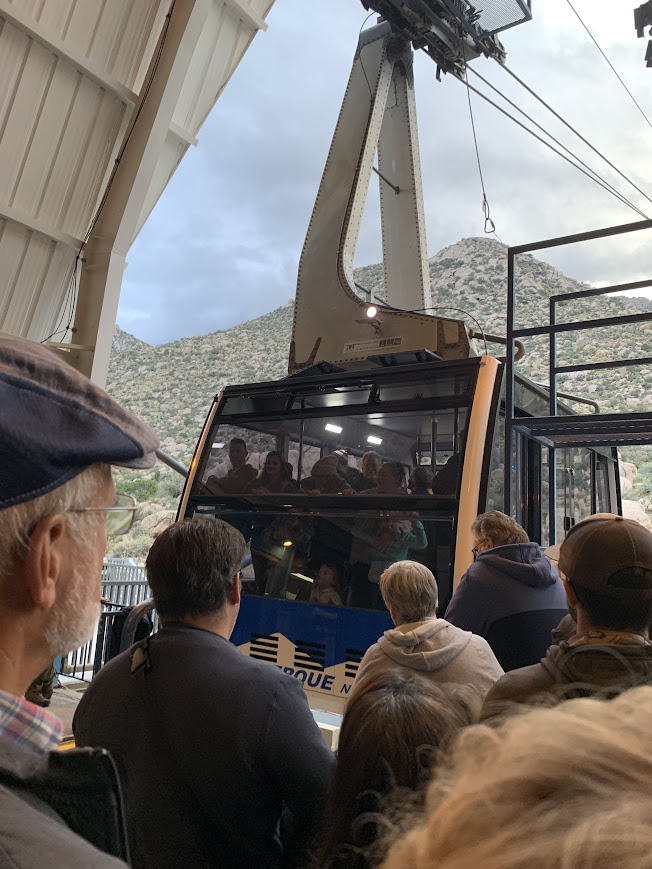 When the tram was originally built in May of 1966, it was, for a while, the longest tram in the world at 2.7 miles in length.  Since then a couple of trams in Europe have eclipsed it.  From this viewpoint, the most distant tower appears to be the top, but it's not. 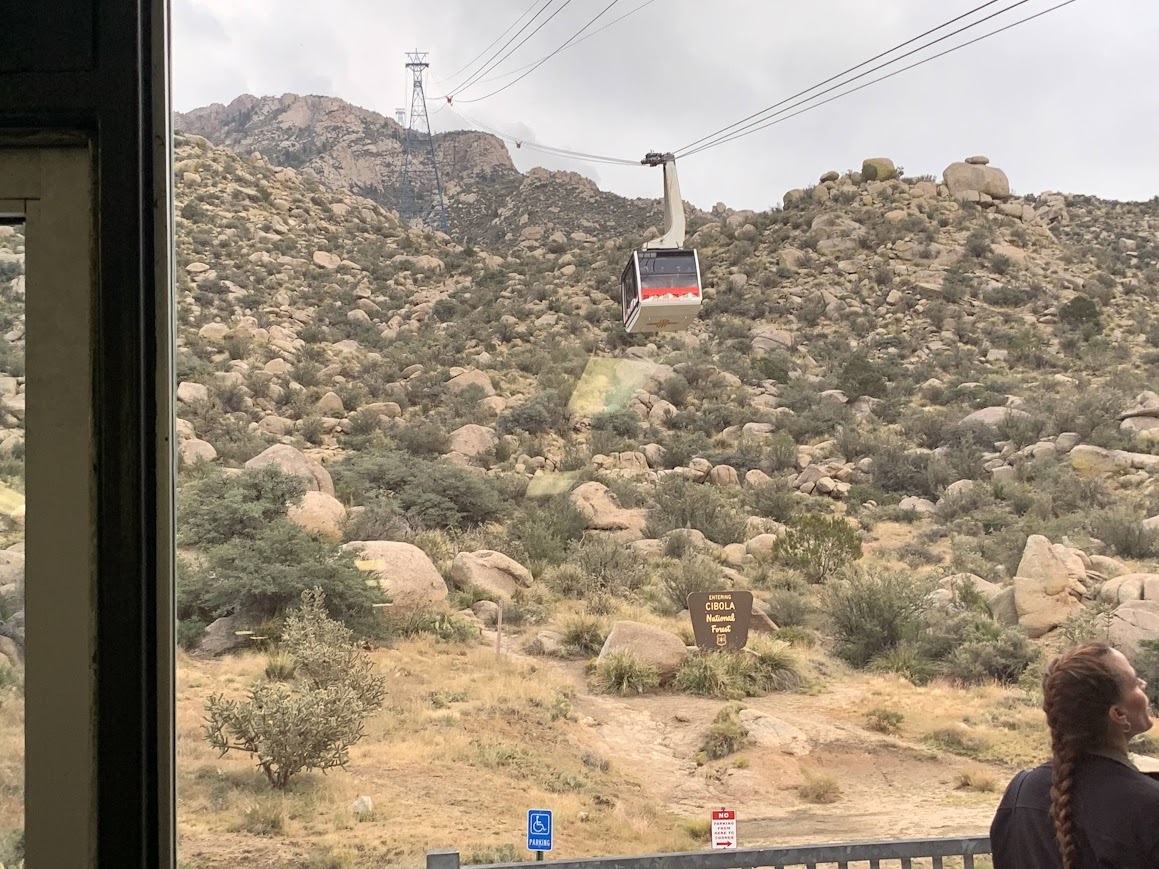 The first leg of the tram ride to the top of the mountain.

The picture below shows the longest leg of the ride.  You may note the weather beginning to close in and obscure the view. 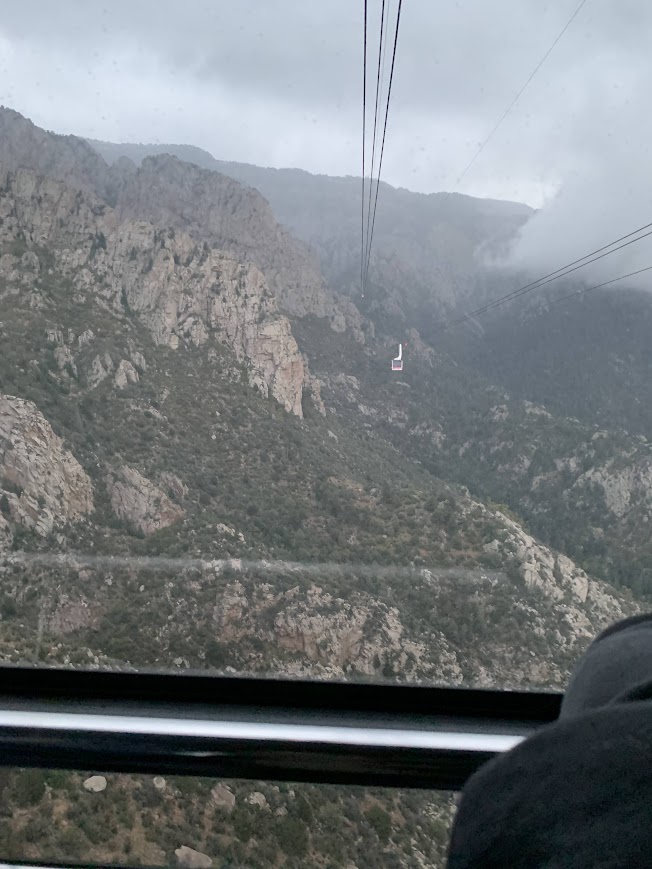 Nearing the half-way mark of the journey as the returning gondola comes into view.

At the top of the mountain the rain began in earnest.  We didn't spend a lot of time at the top.  The big attraction there was the restaurant and we weren't hungry.  On the opposite side of the mountain, we could see part of the ski lift that was heavily used in the winter for skiers. 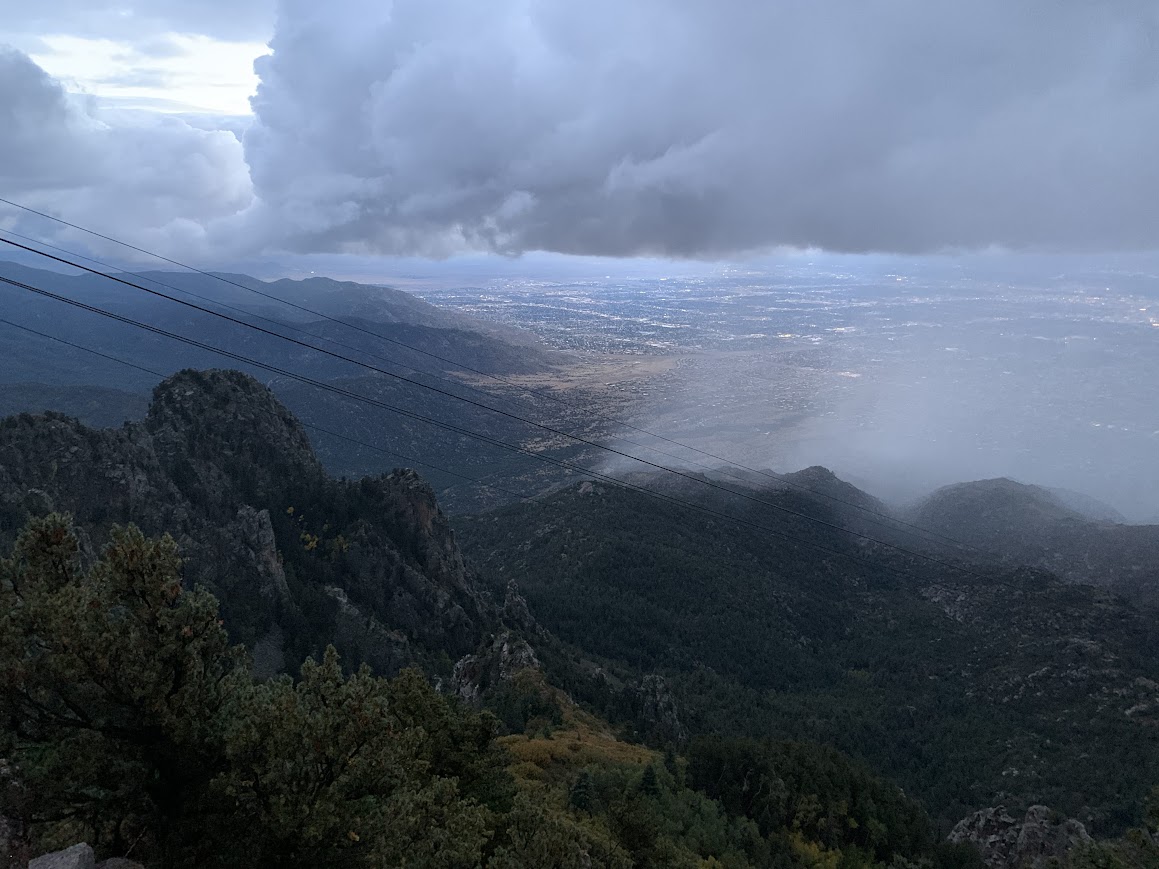 The weather beginning to close in. 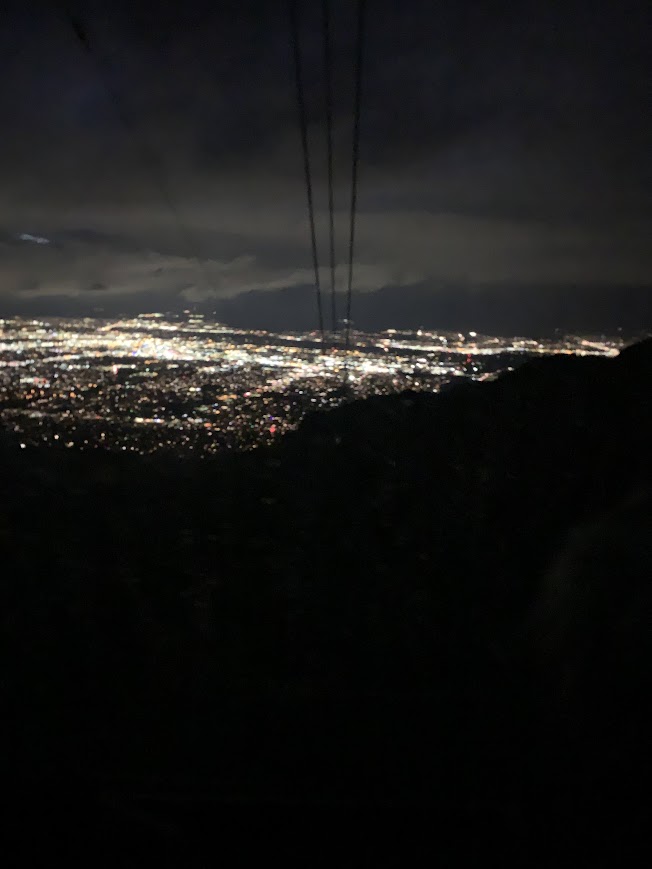 Albuquerque at night on the tram ride down.

If it ever fits into your travel plans, I think the destination is definitely worth the time and effort.