The value of antioxidant rich foods to your body is that they fight free radicals.  So what are free radicals?  Some wild group of terrorists running around?  In this case, no.

Free radicals are molecules that attack or weaken your body’s immune system and thus make you more susceptible to illness or disease.

Free radicals come from some foods we eat and also from environmental sources such as air and water pollution, as well as other pollutants.

You've no doubt read the book called the The Antioxidant Miracle . Well done if you have. You'll know that the best source of antioxidants is found in fruits and vegetables, nuts and grains.

These foods are rich in vitamins A, C, E and beta-carotene.  If your diet is rich in these foods, you probably have little to fear from free radicals.

The best source of vitamin C is citrus fruits.  Additional sources are melons like cantaloupe, mango and guava.

Anitoxidant rich foods also include wheat germ oil and some cooking oils such as sunflower and safflower oil.

Antioxidant rich foods include colorful fruits and vegetables, particularly the colorful ones with hues of yellow, orange, blue, red, or purple.  Not only do they taste good, they have attractive visual appeal!

The most effective way to increase your consumption of free radicals is to eat more fruits and vegetables.  In many countries this is easy to do because of the easy availability of a wide variety of veggies year around.

In less fortunate locations, because of their geographic location far from the equator or because of economic conditions, access to an abundance of fruits and vegetables is more restrictive.

A good goal is to each at least five servings of fruits and vegetable every day.  Supplements are fine, but not nearly as effective as the actual fruit or vegetable.

To get the greatest benefit from these foods, eat them raw or slightly steamed.  Do not overcook because over cooking kill many of the vitamins and minerals.

Foods to limit or avoid entirely because of their shortage or total lack of dietary anti-oxidants include genetically modified foods, refined foods, and meats from all sources because animal products create large amounts of free radicals and little antioxidants.

Refined foods are foods that have been significantly processed or modified from their original, natural state.  Such foods include hydrogenated and partially hydrogenated oils, such as shortenings, and many other heated oils.  Also included are various forms of sugar such as sucrose, dextrose, corn syrup, high fructose corn syrup, and white flours – including the so called “enriched” kinds of flour.

Ronald Prior, PhD, has kindly given me permission to post a list of foods highest in antioxidants.  You will notice that they are all plant based and, usually, readily available.  So feel free to take full advantage of these natural gifts from the garden! 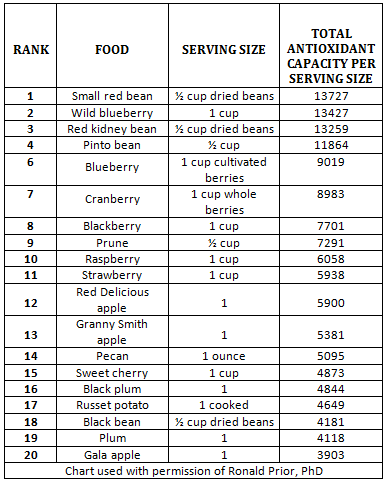 Probably the most widely used dietary antioxidant is vitamin C.  Over 40,000 scientific, peer reviewed articles have been written about vitamin C.

The antioxidant that is most abundant in your body is Glutathione. Over 100,000 scientific peer reviewed article have been written about Glutathione.

It is made inside every cell in your body.  Young people have it in abundance in their youth, but after about age 20 or so, levels drop at the rate of about 1 to 2 percent a year.